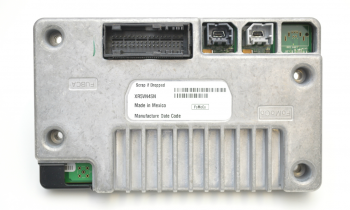 - Ford Focus 3 Restyling (2015-2016)
- Ford Mondeo 5 (2014-2016)
- Ford Explorer 5
- Ford Edge
- other cars with SYNC 2 system
It is delivered without a screen, only the APIM module itself. The number of USB connectors varies, there can be either one or two connectors. To configure the module for your car, you will need your VIN number
The easiest way to activate navigation on your touch screen - replacing the APIM module - is recommended for those who want to use standard navigation in their car (if you did not have it initially). You will also need a standard SD card with SYNC2 navigation